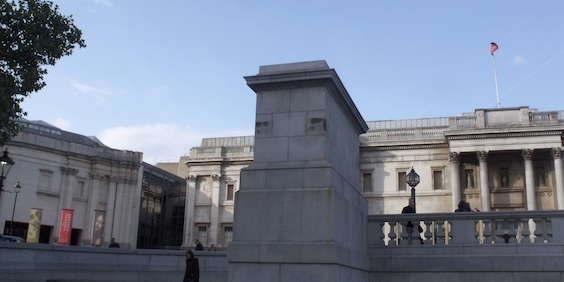 The Fourth Plinth Commission in London has announced the next two works to occupy the fourth plinth in Trafalgar Square. The first, to be released in fall 2022, will be a bronze sculpture by Malawian-born artist Samson Kambalu depicting African independence preacher and hero John Chilembwe and his friend the British missionary John Chorley. The work is based on a photograph taken in 1914 during the inauguration of the new church in Chilembwe in Nyasaland (now Malawi), showing the two men wearing hats and thus representing Chilembwe engaged in an act of rebellion. â€œIn 1914, in Nyasaland,â€ Kambalu told Reuters, â€œAfricans were not allowed to wear hats in front of whitesâ€. The sculpture will present Chilembwe as larger than life, while the dimensions of the figure of Chorley will echo those of the characters permanently occupying the other three plinths of the square, to show that “this is the story of Chilembwe”, according to Kambalu.

The second work, to be released in 2024, will be by Mexican artist Teresea Margolles and will feature the â€œlife masksâ€ of 850 trans people from London and around the world. These will be arranged around the base in a configuration intended to remind tzompantli, or racks of skulls, which Mesoamerican civilizations used to display the remains of victims of sacrifice and war. Margolles said the work was destined to deteriorate under the elements, thus becoming “a kind of anti-monument”.

Nicole Eisenman, Goshka Macuga, Ibrahim Mahama and Paloma Varga Weisz were also invited to submit proposals for the commission, one of the most prestigious and prestigious in the world. â€œThis year, an incredibly strong roster of six incredibly exciting contemporary artists has been selected,â€ said Ekow Eshun, President of the Fourth Plinth Commissioning Group. Eshun noted that 17,500 members of the public voted on the issue this year, the most to vote to date. â€œI’m delighted with the result and can’t wait to see the new works on the plinth. “

The fourth plinth occupies the northwest corner of Trafalgar Square. Built in 1841, it was intended to support a statue of William IV astride a horse, but remained empty for over 150 years due to lack of funding. In 1998, the Royal Society for the Encouragement of Arts, Manufactures and Commerce (RSA) began commissioning temporary sculptures for the plinth, and in 2005 the Fourth Plinth Commissioning Group was established to lead the commissions, on which the public vote. Currently occupying the plinth is a sculpture of Heather Phillipson embodying a large dollop of whipped cream climbed by a colossal fly, presumably in an attempt to reach the gigantic alluring cherry atop White Peak. Past works of the fourth plinth have included the works of Katharina Fritsch Hahn / Rooster (2013), by Yinka Shonibare Nelson’s boat in a bottle (2010), Rachel Whiteread lodge (2001) and that of Bill Woodrow Regardless of the story (2000), the latter laconically but evocatively described on Wikipedia as “a head smashed between a book and the roots of a tree”.