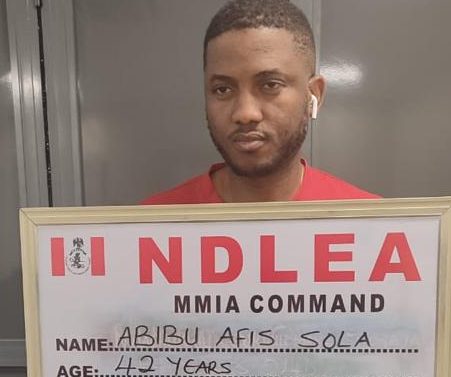 Man Importing Cannabis From US, Cargo Agents, Others Arrested By NDLEA – The Eagle Online

A major importer of the Loud variant of cannabis from the United States of America, Abibu Afis Sola, has been arrested by National Drug Law Enforcement Agency officers at Murtala Muhammed International Airport, Ikeja, Lagos.

This was revealed in a statement by NDLEA Media and Advocacy Director Femi Babafemi on Sunday.

In the statement, Babafemi revealed that Sola was arrested in connection with a 19.30 kg Colorado shipment from Los Angeles, USA, which was intercepted on June 30, 2022 at the import hangar of NAHCO freight from Lagos airport.

A cargo agent, Elizabeth Njoko, 37, was also arrested for attempting to export 250 grams of tramadol and cannabis to Dubai, United Arab Emirates through NAHCO’s export shed.

The drug exhibits were concealed inside a few gallons of palm oil and honey, which were wrapped among food and hair ties.

Also at Lagos airport, 249,600 tablets of Tramadol 225mg were recovered from a shipment from India at MMIA’s SAHCO import hangar.

The consignment that arrived from India via Addis Ababa on Ethiopian Airline flight on August 4, 2022 was finally evacuated on August 17, 2022 as an abandoned seizure.

A passenger bound for Italy, Oziengbe Ehighalua Andrew, 55, was arrested on August 19 with 600 grams of tramadol 200mg as he attempted to board a Royal Air Maroc flight to Italy, through Casablanca.

In the same vein, seven cartons of khat leaves with a total weight of 295 kg were seized at the NAHCO import hangar at the Lagos airport.

The shipment arrived in Nigeria from Tanzania via Cairo on Egypt Air.

Officers from the NDLEA’s General Operations and Investigations Branch attached to courier companies intercepted 11.36 kg of heroin and cannabis packaged for the United Arab Emirates, the Netherlands and Omar.

The drugs were concealed in a dictionary, fancy light and body cream.

In Niger State, 139 bags and 176 compressed blocks of cannabis loaded in Ogere, Ogun State and heading towards Zaria, Kaduna State were seized by NDLEA officers in Suleja , in Niger State, along the Abuja-Kaduna highway from a company vehicle, while the driver, Sani Mohammed, 44, and his assistant, Abubakar Abubakar, 30, were arrested.

Raids carried out in Akala in the Mushin area of ​​Lagos State also led to the arrest of Pelumi Goodness and Ola Funke, while more than 1,171.75 kg of cannabis and 29 liters of codeine syrup have been recovered.

Bangladesh ‘guesthouse’ reaping Ramadan rewards with free meals for all