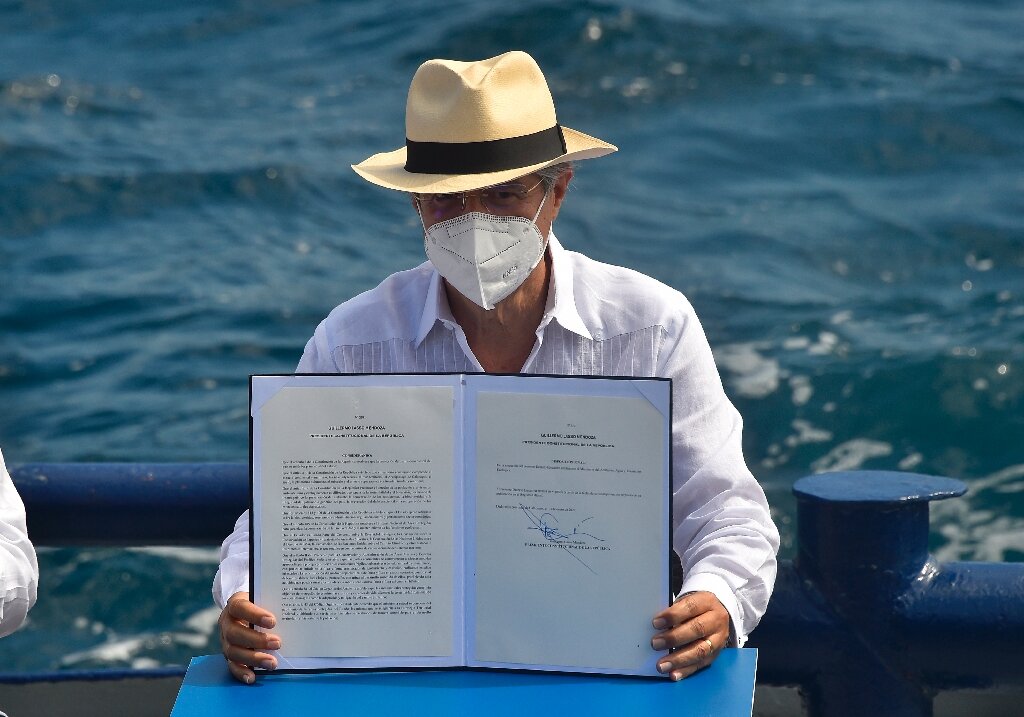 Ecuador on Friday created a massive new marine reserve north of its Galápagos Islands, forming a peaceful corridor to Cocos Island National Park in Costa Rica to preserve species of migratory wildlife, such as sharks.

On the occasion of the opening of the marine reserve, he then cut a ribbon made of materials collected during the coastal clean-ups carried out in the Galápagos.

Thus, the archipelago that inspired the English naturalist Charles Darwin has now expanded to an impressive marine protected area of ​​198,000 square kilometers.

The Galapagos Marine Reserve, in which industrial fishing is prohibited, is the second largest in the world. More than 2,900 marine species have been reported in the archipelago, which is a natural World Heritage Site.

The leaders of these two countries also signed the decree with Lasso.

Lasso announced the expansion of the Galapagos Marine Reserve, which has unique flora and fauna and fragile ecosystems, in November in Glasgow at the COP 26 climate summit.

The project was in exchange for a reduction of Ecuador’s international debt.

The creation of the “Brotherhood” reserve is a “clear message to the world,” Lasso said on Friday, describing it as a “new relationship with the Earth, a new understanding of what constitutes progress for humanity.”

Colombian President Ivan Duque and former US President Bill Clinton attended the event, as well as government officials from Costa Rica and Panama.

Duque said the eventual addition of the Malpelo Islands in Colombia and the Coiba Islands in Panama to the vast marine reserve will allow the migration of species such as sea turtles, whales, sharks and manta rays.

This new reserve “will ensure the survival of 40% of the world’s marine species,” Duque said.

“We may be a small territory…but the planet is also ours,” Lasso said.

“The seas are great regulators of the global climate,” he said, adding that “taking care of them is not naïve idealism, it is a vital necessity.”

Located in the Pacific about 1,000 kilometers (600 miles) off the coast of Ecuador, the Galápagos Islands are a protected wildlife area and are home to unique species of flora and fauna.

The archipelago was made famous by British geologist and naturalist Charles Darwin’s observations on evolution.

This document is subject to copyright. Except for fair use for purposes of private study or research, no part may be reproduced without written permission. The content is provided for information only.