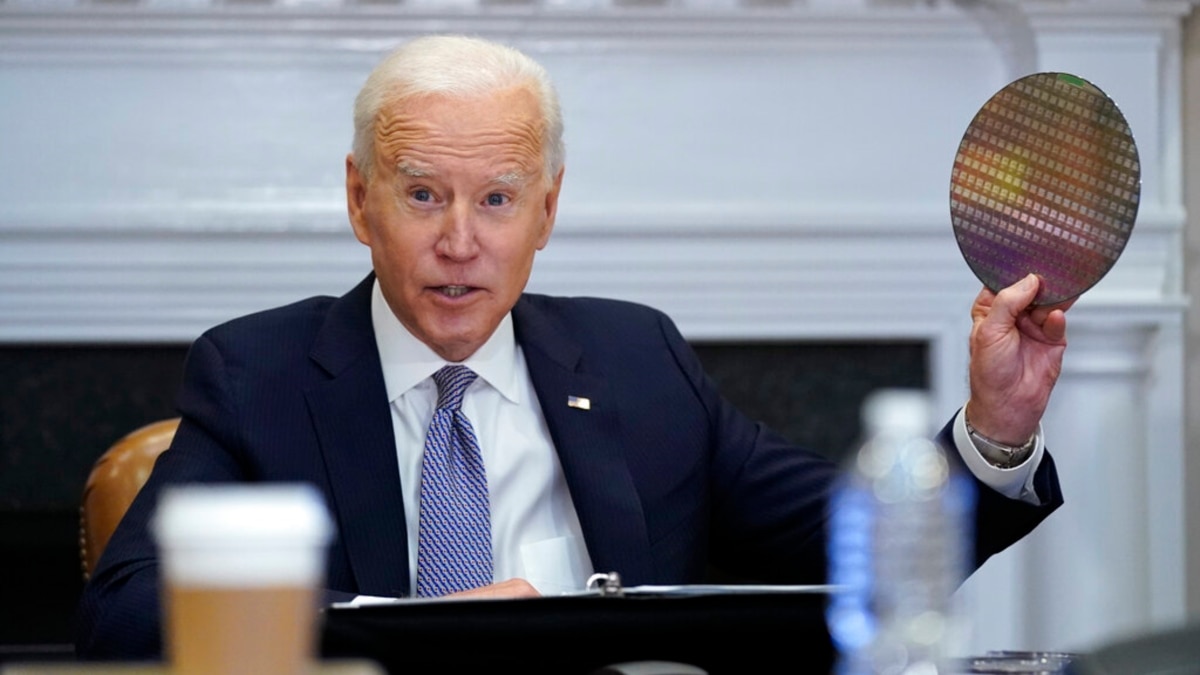 US President Joe Biden has touted a $20 billion investment by US technology company Intel to build a semiconductor factory in Ohio to address a global shortage that has been exacerbated by the COVID-19 pandemic and the US-China trade war.

In a speech Friday at the White House, Biden said the Intel factory, part of the administration’s effort to work with the private sector, would create thousands of jobs. He urged Congress to pass legislation to further develop domestic chip manufacturing, placing it in the context of strategic competition with China.

“Today, 75% of production takes place in East Asia; 90% of the most advanced chips are made in Taiwan,” Biden said. “China is doing everything it can to conquer the world market so that it can try to outdo us.”

“This site alone could reach up to $100 billion in total investment over the decade,” he said.

The White House pointed to other investments in U.S. semiconductor manufacturing earlier this year by Samsung, Texas Instruments and Micron.

“Congress can accelerate this progress by passing the United States Investment and Competition Act, also known as USICA, which the President has long championed and called for action on today,” said White House press secretary Jen Psaki, referring to legislation to bolster research, development and manufacturing for critical supply chains to address semiconductor shortages.

Driven by Washington’s desire to retain an edge over China’s technological ambitions, USICA passed with rare bipartisan support from the Senate in June, but has yet to pass the House of Representatives. It includes full funding for the CHIPS for America Act, which provides $52 billion to catalyze more private sector investment in the semiconductor industry.

“The Chinese have been very clear. They want a local chip industry. They want to be globally dominant, which means displacing the United States and others,” James Lewis, director of the technology and public policy program at the Center for Strategic and International Studies, told VOA.

The United States’ share of global semiconductor production has fallen from 37% to 12% over the past 30 years, according to government data.

The COVID-19 pandemic and extreme changes in consumer demand during shutdowns have exacerbated the fragility of the global semiconductor supply chain.

“Consumer demand grew rapidly for items such as personal computers, while supply couldn’t keep up and many Chinese manufacturers were stuck,” said Nada Sanders, professor of supply chain management at the D’Amore-McKim School of Business at Northeastern University. VOA.

Meanwhile, the U.S.-China tariff war that began under the Trump administration and geopolitical disputes between the two global rivals have made the environment even less conducive to cooperation, Sanders said.

The Intel factory won’t be operational until 2025, but analysts believe the initiative will still be effective in securing long-term chip supply.

“You can’t underestimate the demand for this stuff. It’s growing at about 10% a year,” Lewis said.

As the United States expands its domestic chipmaking capacity, analysts say a key component is working with international partners, including South Korea, Taiwan and Japan, to fill the supply gap.

The spokesperson added that the two countries have been working closely in this area bilaterally through the Quad, a security dialogue forum involving the United States, Australia, India and Japan.

Taiwan, home to the Taiwan Semiconductor Manufacturing Company (TSMC) and the world’s largest producer of advanced chips, is another key partner.

“If China were to take control of Taiwan and use TSMC as a leverage point, it would be extremely disruptive,” Lewis said. “Taiwan and its proximity to China and China’s hostility are of great concern.”

The global chip shortage has pushed up inflation rates and crippled the administration’s economic stimulus efforts. It contributed to strong increases in the price of new and used cars, which account for one-third of annual price increases in the consumer price index.

Biden’s endorsement in the polls has lagged recently, in part due to inflation. Consumer prices jumped 7% in December from a year earlier, the highest rate of inflation in 40 years. That has dampened the economic recovery in a year that the administration says has seen the strongest job growth in U.S. history.

Is Costco Good For A Mortgage?